The History of Hope Christian College 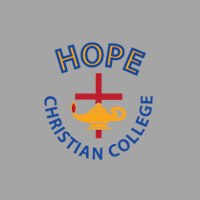 Hope Christian College was started in January 1999 by two women, Mrs Karen Richards and Mrs Nancy Park, who felt lead by God to establish an independent Christian school based on the Bible. During the first six months, the 17 students and 1 staff member used the Roelands Hall while waiting for leasing arrangements to be finalised to enable the school to use, what was then, the old Roelands Primary School. There was much joy in July 1999 when a lease was signed with the Harvey Shire which enabled the School to move. The school buildings consisted of the original classroom block, which is now the Office, staff room and Year 3 classroom.

Mrs Rebekah Alexander became the Principal in the year 2000 and was instrumental in securing grants and loans which enabled the school to build a classroom and science laboratory with attached toilets. The extra buildings allowed for more students to enrol at the school, so by the time Mrs Alexander left in 2006, the school had 77 students and 10 staff members.

Mr Peter Stone took over as Principal in 2007. Student numbers continued to increase and a Kindergarten-Pre-primary block with a playground was built. In 2007, the School was allocated funds under the Australian Government program designed to provide new infrastructure to eligible schools. The School used this money to build the Hall and a primary classroom block. Considering the continued growth in student numbers, the Hope Christian College Board decided to search for suitable land near the school to build a larger school facility. In 2011, the School purchased 18.5 acres of land on Government Road, and set about having the land rezoned.

By the end of 2016 the school had 284 students, the purchased land had been rezoned, new school buildings were being constructed off site and the car park and basketball courts were in place at the new school site. The 29th of March, 2017 was a landmark day for the School. The School watched on as the first of the new buildings were lifted into place.
The High School moved to the new site in 2018. Subsequently 11 more classrooms, a science lab, home economics / art room and manual arts block has been added in 2021. Our student numbers stand at 423.

We as a school community say:
To God be the Glory, for what He has done in this His school.